The landscape of Tuscany is wonderfully romantic – undulating hillsides clad in pine trees, rambling medieval hamlets and fields full of poppies and sunflowers.

It was for this reason (among others – namely the food, wine and sunshine) that my husband and I decided to get married there a couple of years ago.

Our venue was picturesque 12th century castle Castello di Modanella, in the Tuscan hills, about 20 minutes from Siena, and our guests all stayed on-site in a cluster of converted farmhouses for a long weekend of celebrations. Those few days were unforgettable, the beginning of what will, no doubt, be a life-long love affair with this beautiful region.

As our first anniversary approached, we decided to return there for a long-weekend break and started our search for somewhere super swanky to celebrate in style.

We settled on Castel Monastero – a stunning medieval village turned five-star hotel – less than 20 minutes away from our wedding venue, in the town of Castelnuovo Berardenga.

Read on for my full review…

STEPPING BACK IN TIME

Castel Monastero is part of the Leading Hotels of the World group and attracts an A-list clientele (Samuel L. Jackson and Michael Douglas are regulars) so, in terms of our expectations, the bar was set pretty high. But from the moment we glimpsed the historic property peeking through the dense cypress trees as we wound our way up the drive, I knew it was going to be a special few days. 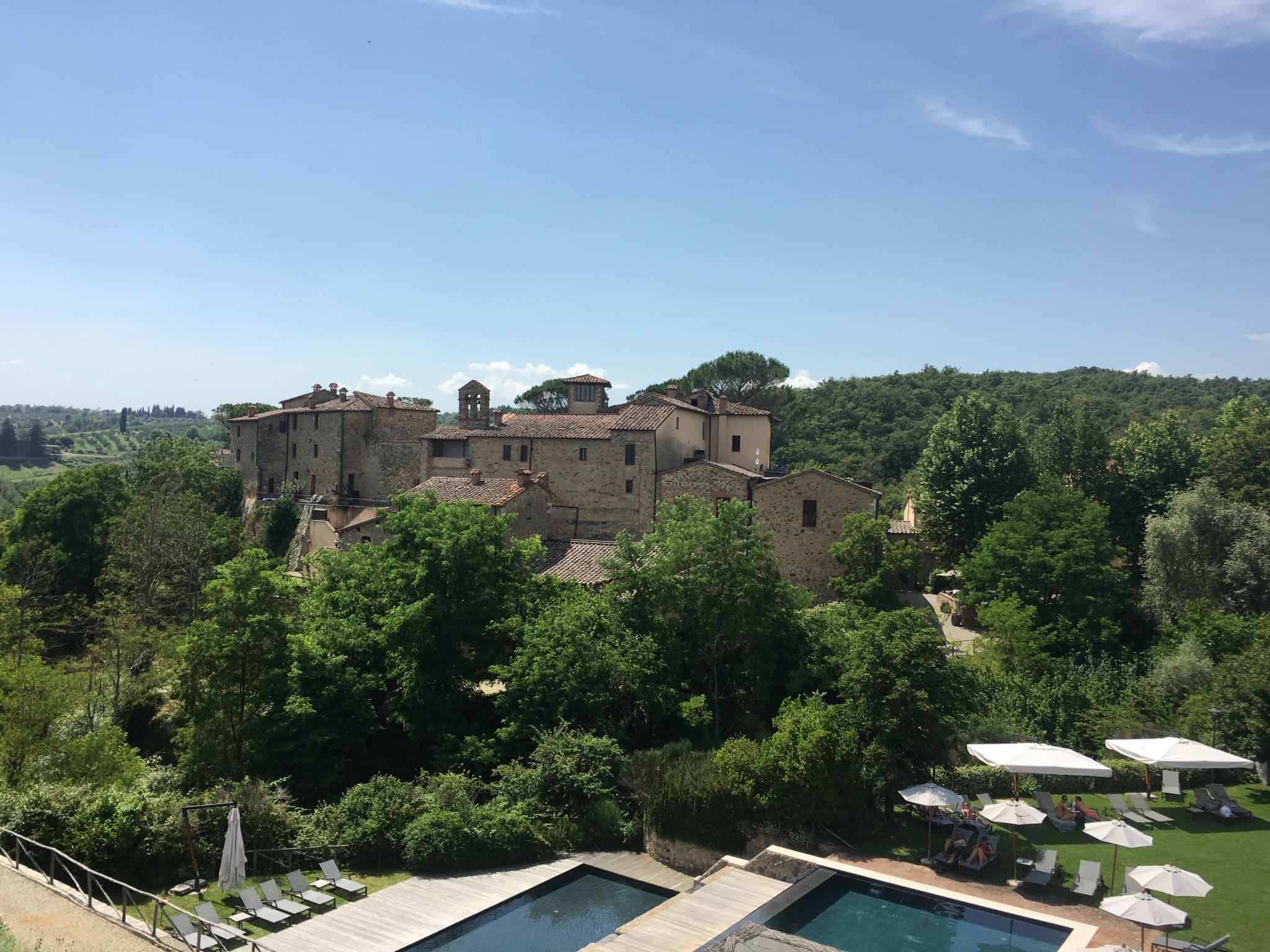 Set in four acres of vineyards and chestnut groves in the Ombrone Valley, Monastero dates as far back as 1050 and is the latest of Tuscany’s ‘village’ hotels – a converted hamlet of pretty low-rise historic buildings. It was formerly called Monastero d’Ombrone, and has been both a castle and a monastery in the past – hence its name – and has now been given the five-star treatment, offering 74 guestrooms and suites (as well as a spacious villa sleeping up to eight), two restaurants and a luxurious spa.

We had hired a car, which is a real essential for any trip to Tuscany, to give you the freedom to travel to all the gorgeous cities, villages and towns, and to see the best of the countryside. The journey time to Monastero from Florence Airport, where we had flown into, was a manageable one hour, 15 minutes, though Perugia Airport is slightly closer at just over an hour’s driving time.

As we pulled up outside the austere wrought-iron gates, a porter magically appeared to take our car keys and park up for us, while another popped the boot and whisked our luggage away to reception with army-like efficiency – leaving us free to stroll through to the beautiful courtyard.

One thing that sets Monastero apart from other historic hotels is that it hasn’t lost a sense of its history. It isn’t so overtly luxurious that the character of the former property has disappeared. In fact, it was quite the opposite here.

Monastero is so authentic that I felt like I’d stepped onto a film set, the cluster of beautifully preserved stone-built properties surrounding a sun-soaked cobblestone piazza, with its original monastery church (which still hosts mass on a Sunday). 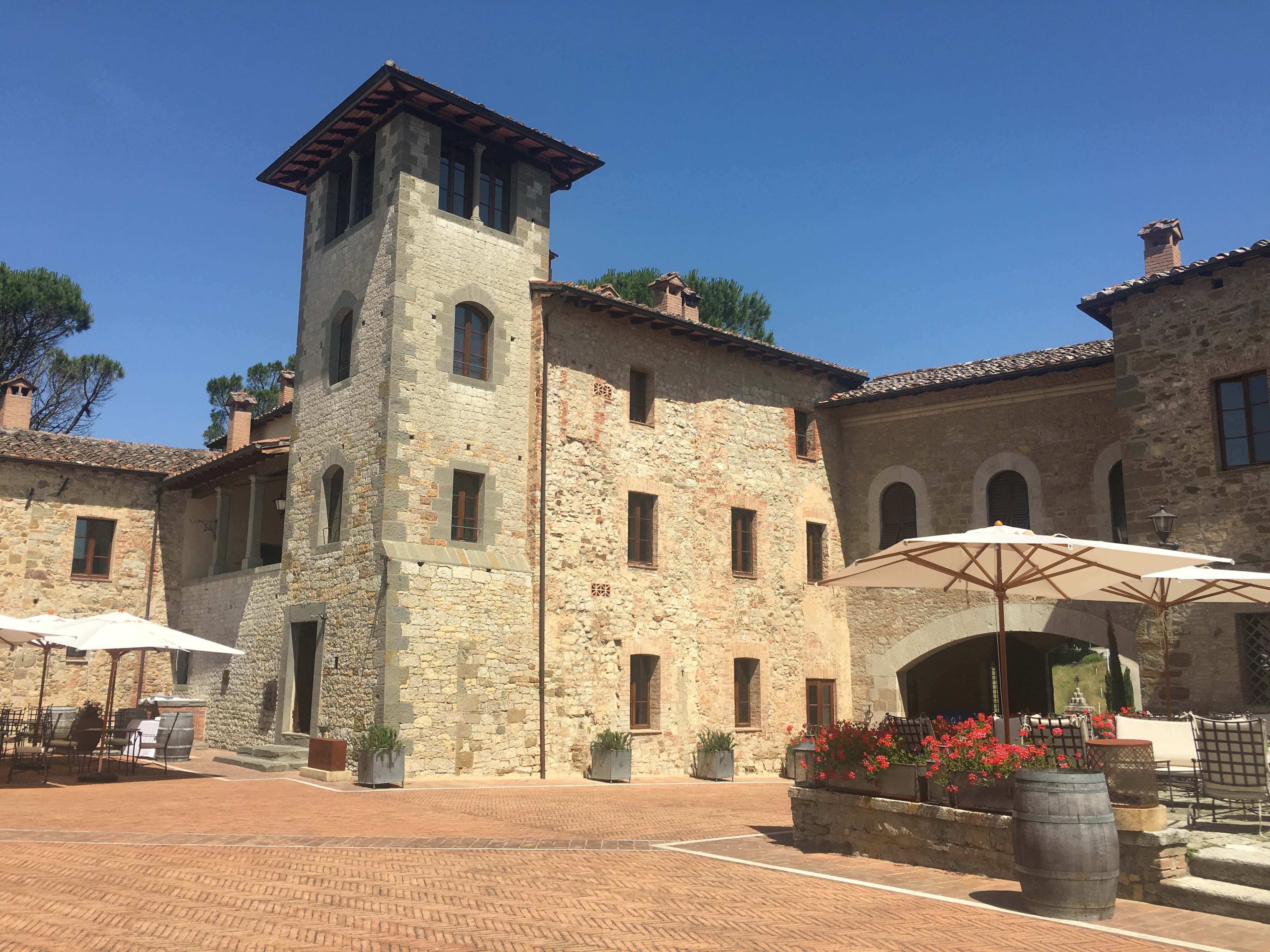 The wood-beamed rooms surrounding the castle courtyard are beautiful, but we were after ultimate peace and tranquilly, so opted for a suite a short walk away in the grounds.

Found in a two-storey villa, overlooking the tiered cascading outdoor swimming pools, it had two separate bathrooms – one with a sunken bathtub and another with a large walk-in shower – and the bedroom/living area had a vaulted, heavily beamed ceiling with masculine dark wood furnishings. Some rooms have wooden floorboards and original stone features, and there are distressed Chesterfield leather sofas in all the rooms. It was Tuscan rusticity with a chic and glamorous twist. 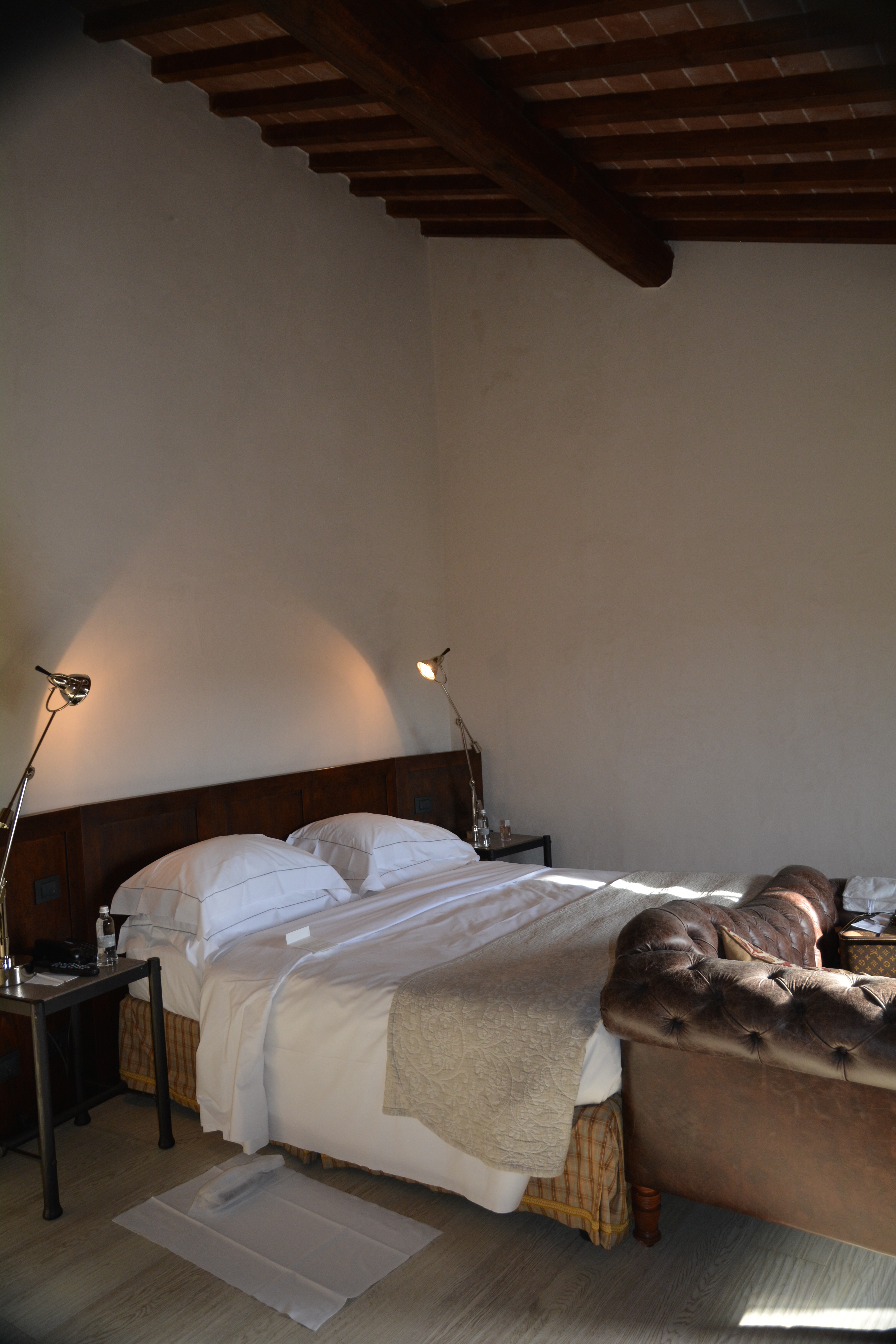 A highlight of our trip was breakfasting right on the sundrenched cobbled courtyard every morning at La Contrada restaurant, overlooking that historic chapel and bell tower. The buffet breakfast was a treat, too, with an enormous selection of fresh fruit, cakes, croissants, cold meats and cheeses, and there were bottles of champagne in buckets of ice to help yourself to (which was a lovely touch and went down well on the morning of our anniversary!).

La Contrada also serves gourmet evening meals – all traditionally Tuscan with a modern twist – while La Cantina restaurant, set in the hotel’s medieval cellars with vaulted ceilings and exposed-brick walls, is a more relaxed dining experience. We visited on our penultimate night and sampled a mouth-watering meat and cheese platter and Tuscan cantucci cookies.

Menus at both restaurants are overseen by consultant chef Gordon Ramsay. 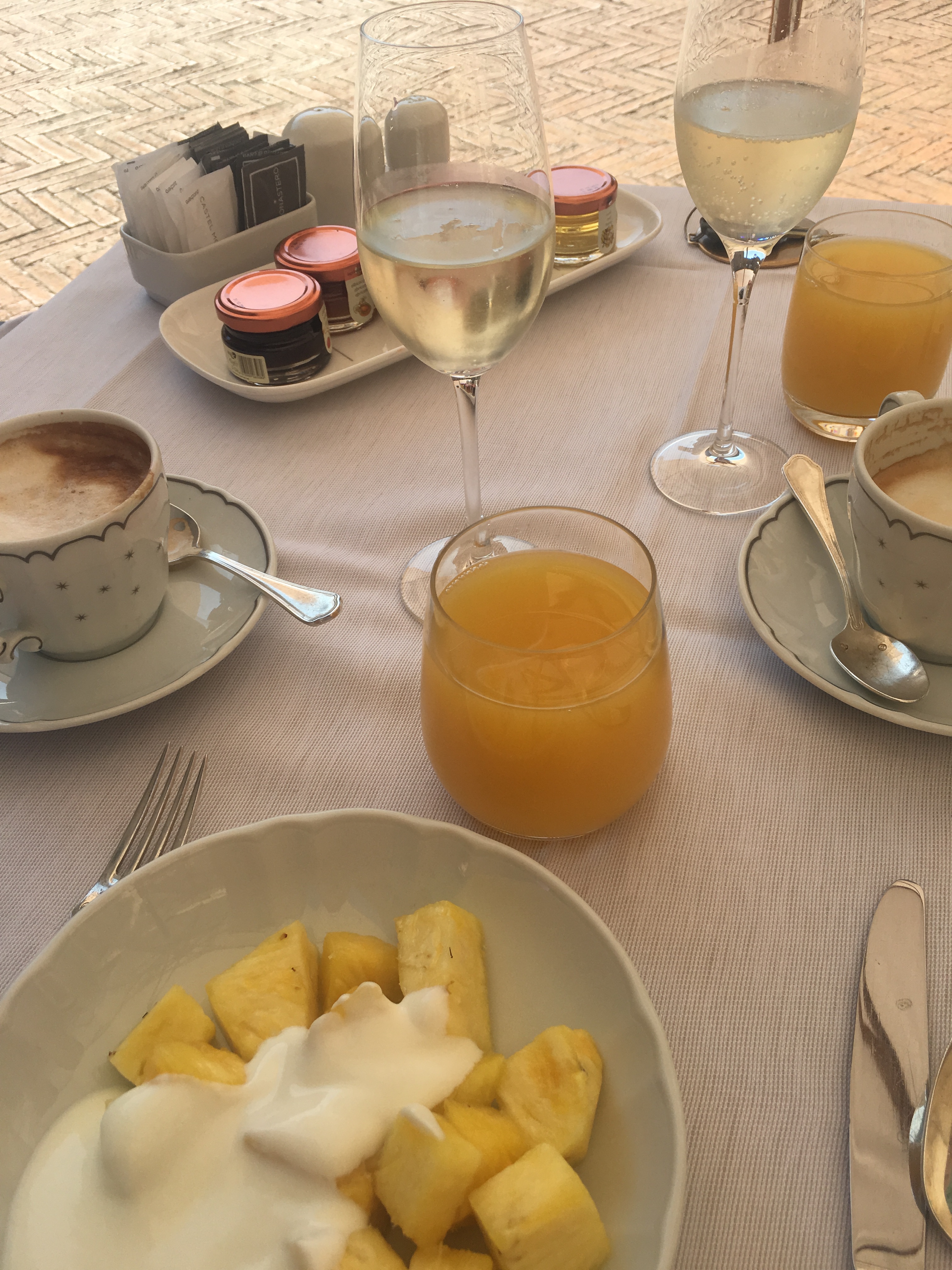 Fresh pineapple, yoghurt and champagne for breakfast at La Contrada on our anniversary 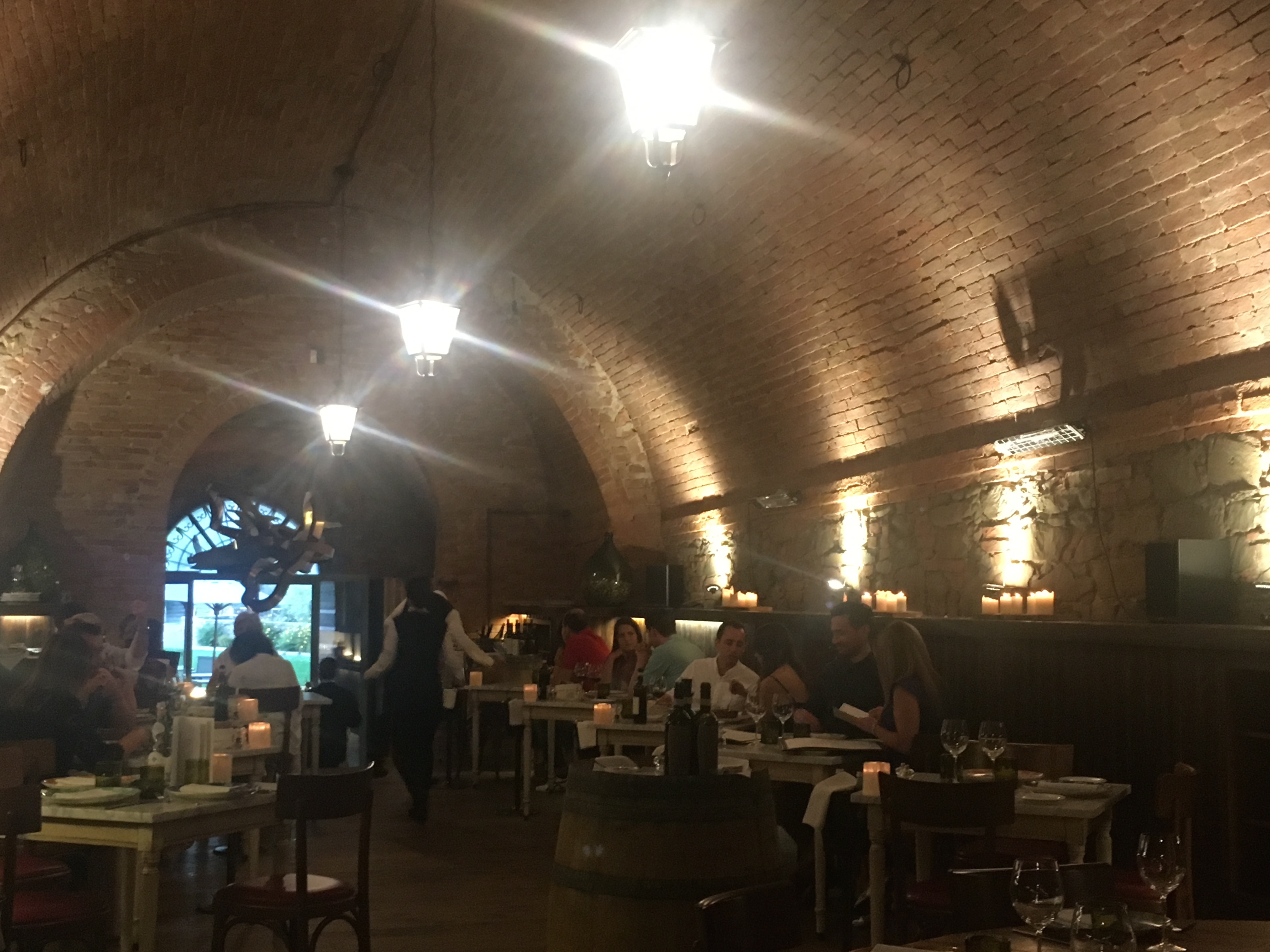 Spread over an area of 1,000 square metres and housed in two elegant villas, Aquae Monasterii is one of the highlights of the resort. We were told that many guests visit only for the exclusive spa programmes, focused on thalassotherapy and detox, acupuncture, positive thinking sessions and emotional therapy. You can also get more traditional treatments like massages.

The wellness facilities are extensive, too. We enjoyed floating in the salt-water immersion pool and stayed in the huge whirlpool until our fingertips were wrinkled. There are lots of sunbeds and chill-out areas, piles of fluffy white towels everywhere you turn and you can enjoy the most incredible views over the historic resort while floating in the immersion pool.

We didn’t have time during our stay, but we wish we’d taken part in one of the meditation and yoga sessions, which are led by internationally renowned qualified instructors. 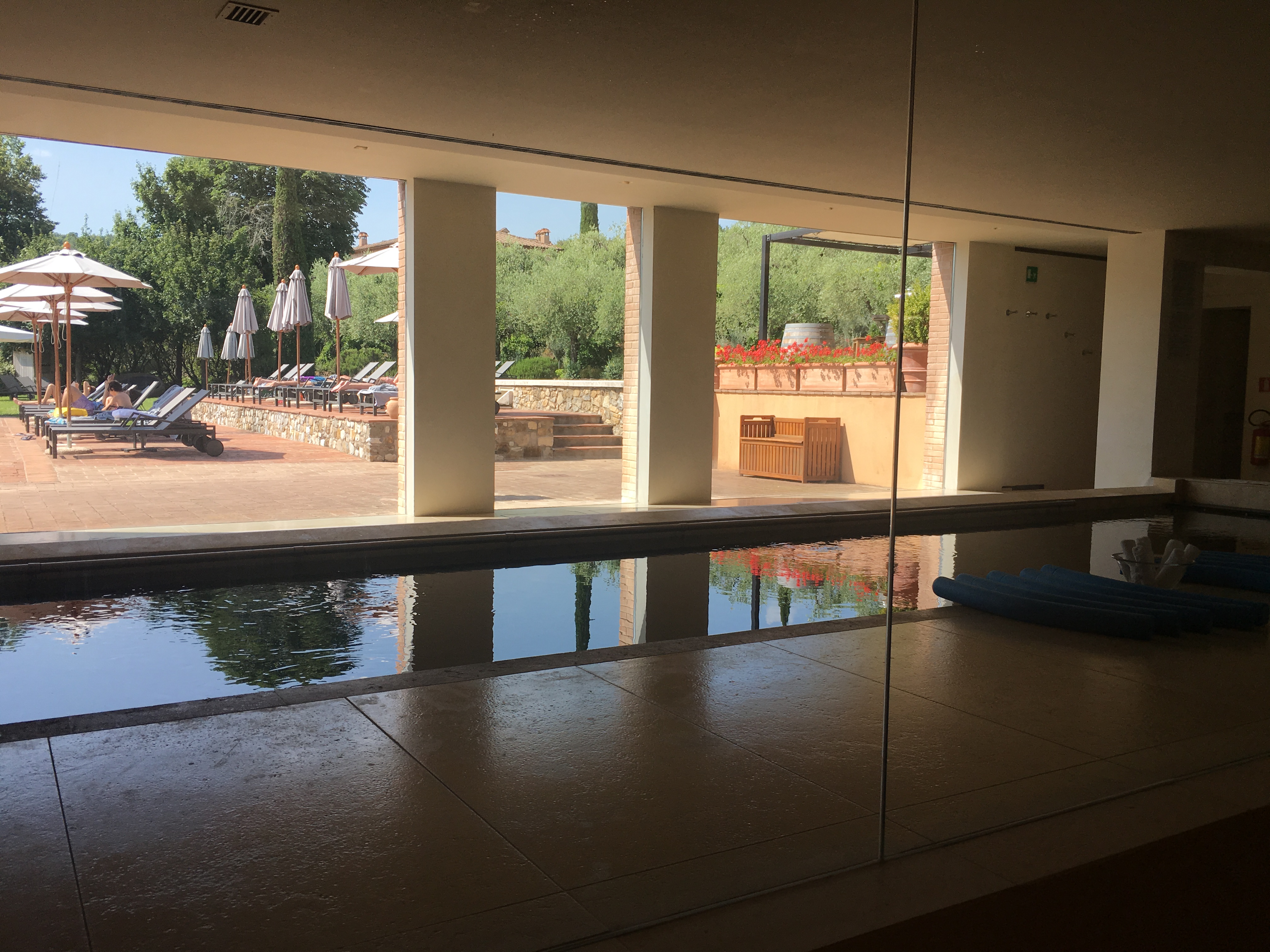 If you feel like heading out to explore the countryside on bikes, this can be organised by the hotel and routes will be tailored to suit your fitness level and how long you want to be out exploring. But to really make the most of visiting this region, I’d recommend that you hire a car, as some of our best days were spent driving to further-away hilltop towns and villages.

We loved Montepulciano, 40 minutes away, with its tangled warren of ancient streets and one of the most well-preserved and architecturally beautiful squares (where scenes from the Twilight saga film New Moon were shot).

We also visited Montalcino, which has an impressive fortress and is famous as the producer of Brunello, one of the world’s finest red wines. On another day we ventured much further to Volterra, near Pisa, an original Etruscan hilltop settlement, with magnificent views and gorgeous, characterful narrow streets. 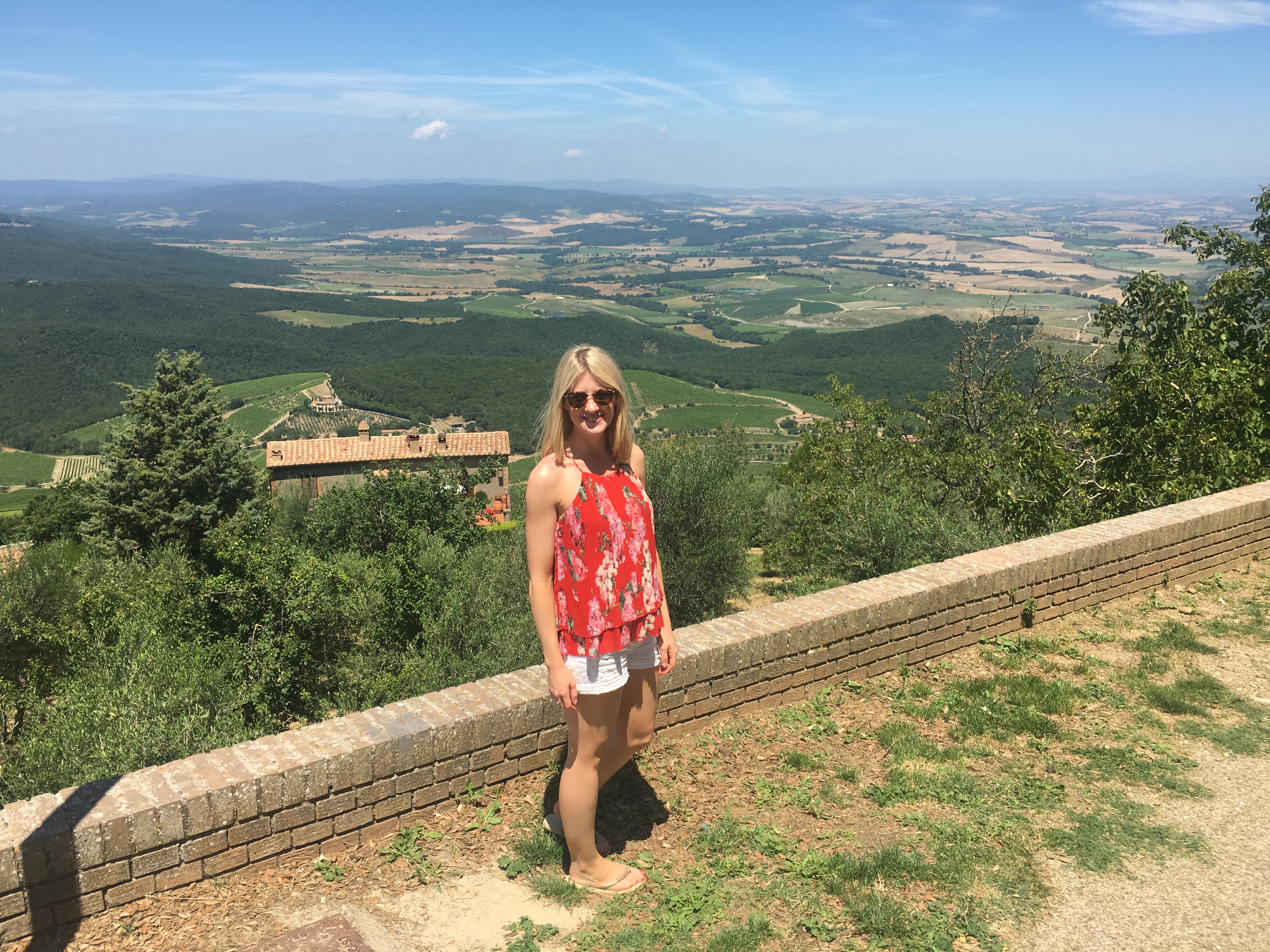 Checking out the views in Montepulciano

Most of the big tourist sights are in close proximity to one another, so you can walk to each of them. We started on Siena’s shell-shaped Piazzo del Campo (the main town square) then headed to the gothic cathedral with its striking black and white candy-striped marble exterior.

After that, we rather stupidly climbed the 500 steps to reach the top of Siena’s 88-metre high Torre del Mangia – the third tallest tower in Italy! However, the views from the top make all that sweaty exertion worth it. 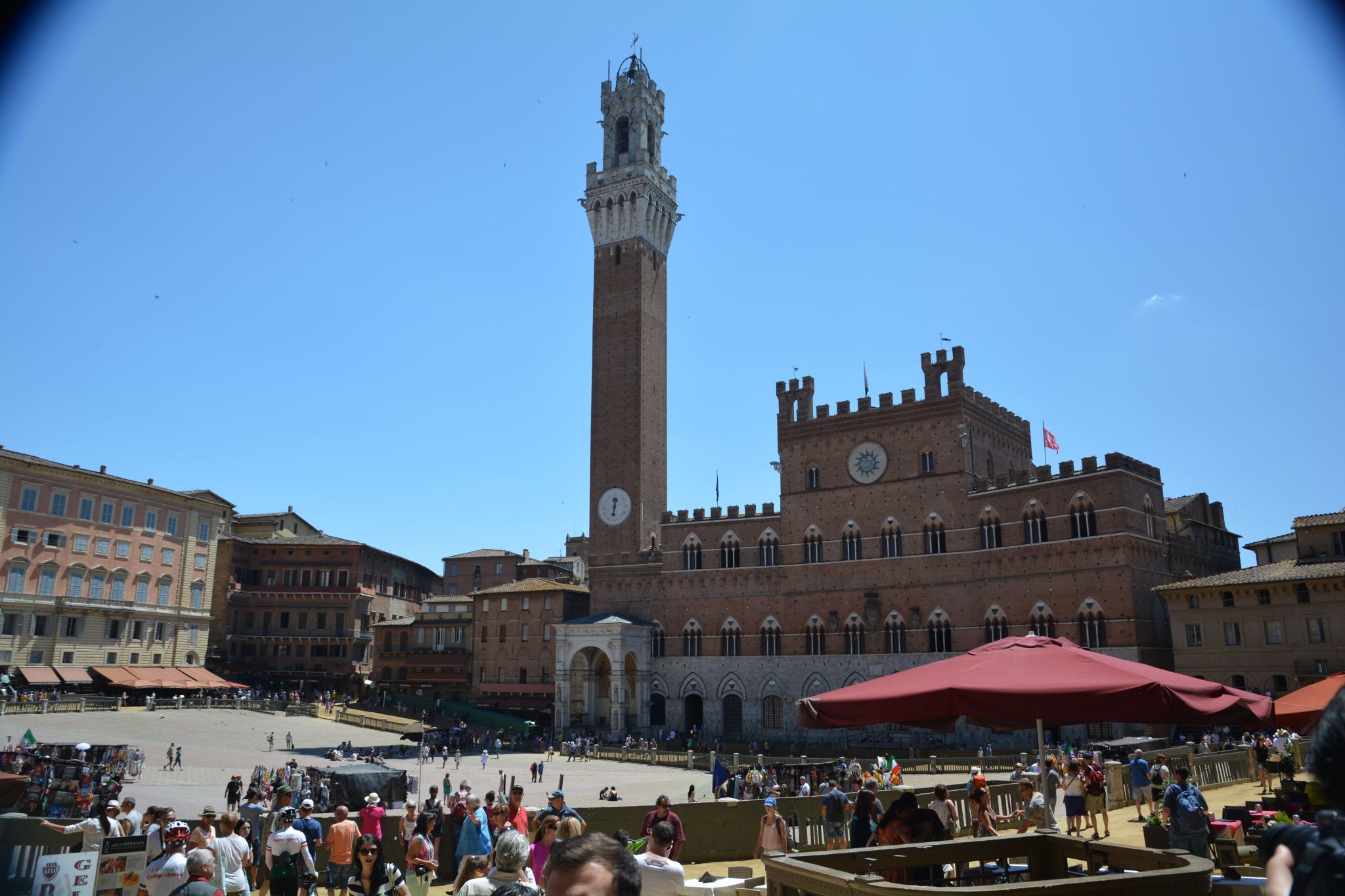 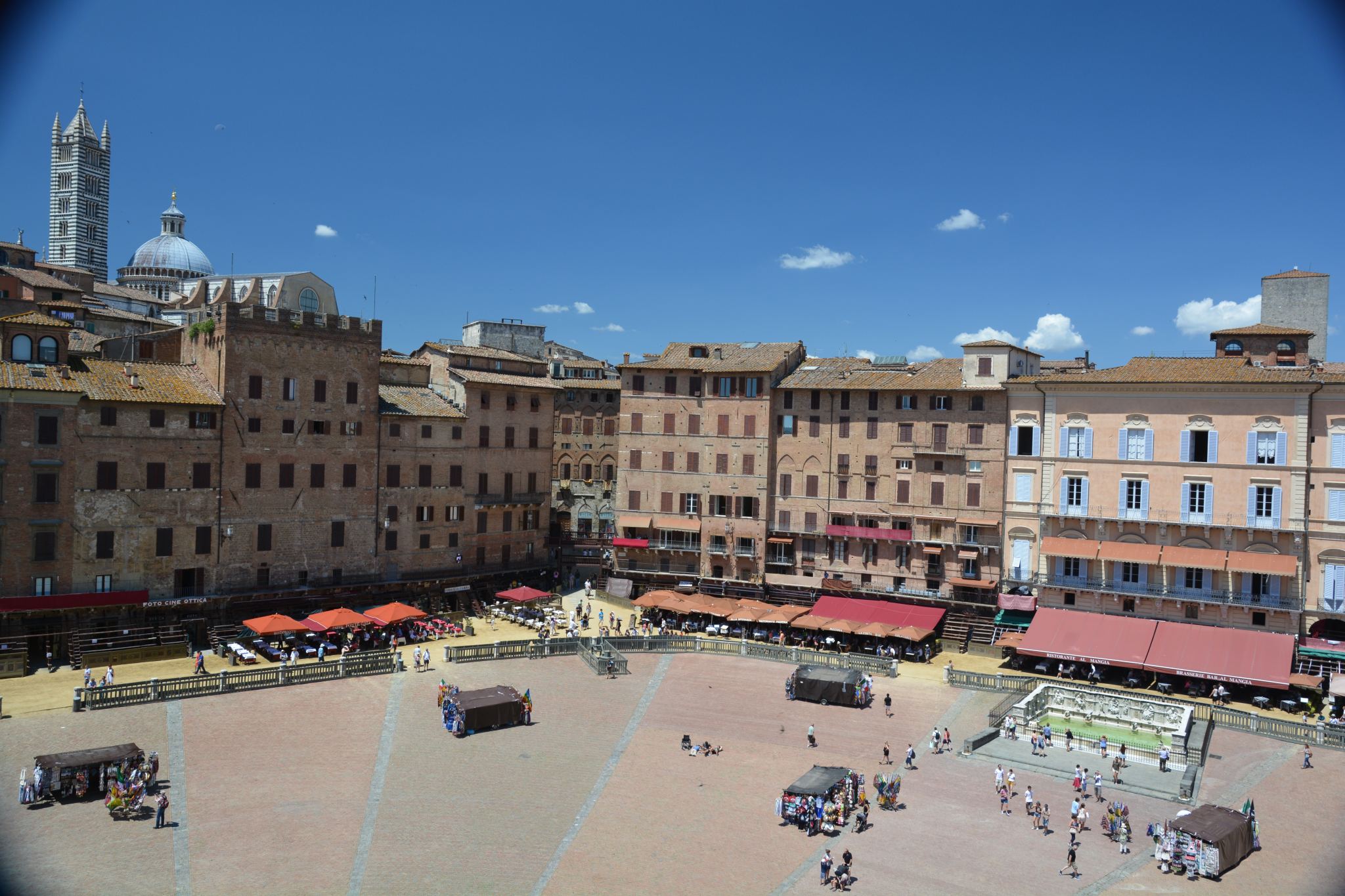 On our final night in Tuscany, we drove to Castelnuovo Berardenga, where we dined on the outdoor terrace at Villa di Sotto (it’s also a B&B with a pool, if you fancy staying the night) – a real hidden, local gem. We watched the sun go down over the vineyards, enjoying the hubbub of locals dining on wine and antipasto platters. 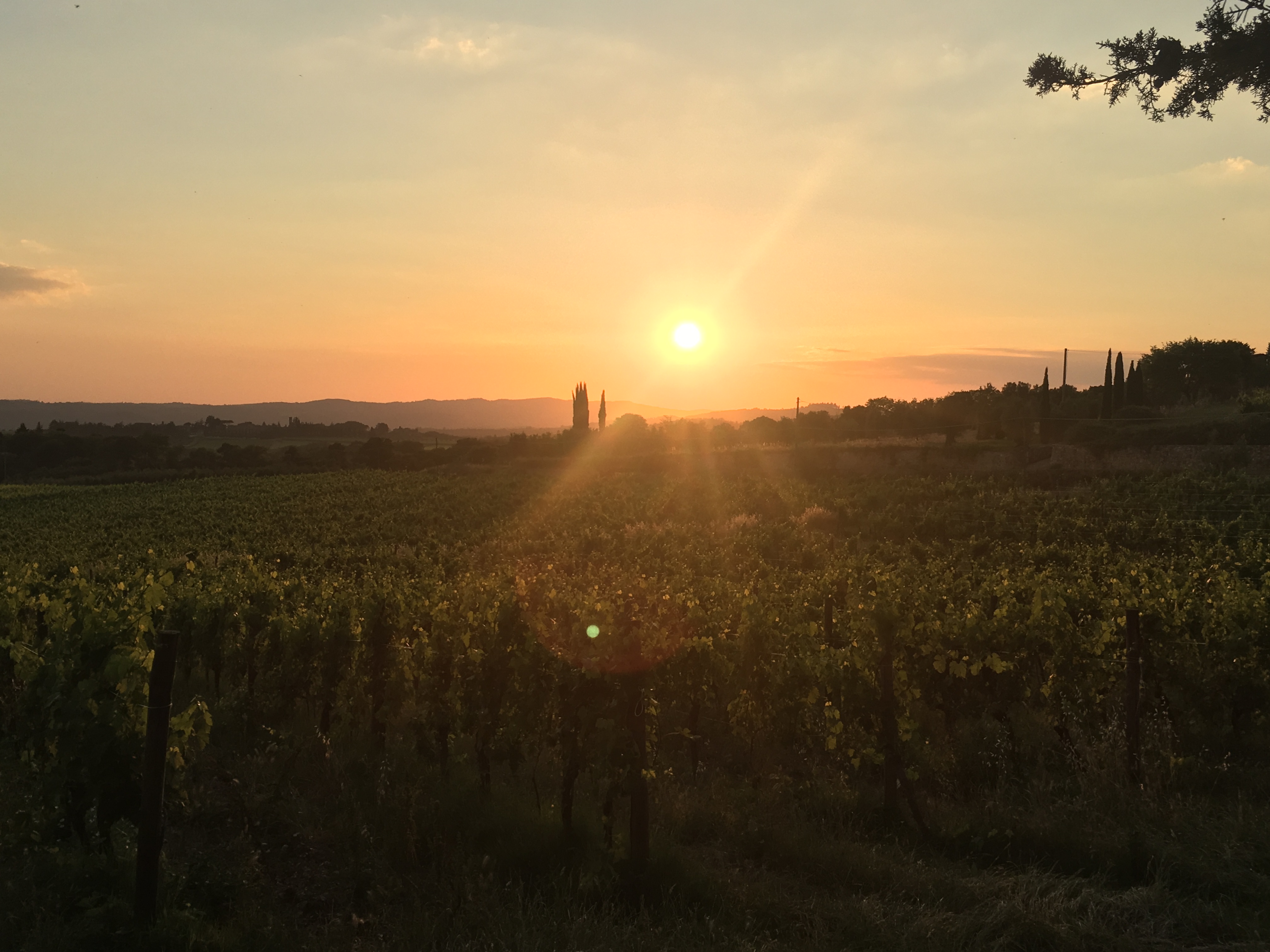 The view from the terrace at Villa di Sotto

Aquae Monasterii may be beautiful, but you have to pay a rather eye-watering 20 euros (per visit) as a hotel guest to use the wellness facilities. This is a bit disappointing given that Monastero is billed as a spa hotel. Still, you do feel as though you’re getting your money’s worth once inside.

Tucked away in the Chianti hills, beautiful Castel Monastero offers an authentic and luxurious Tuscan experience far from the madding crowds. We had a truly magical stay.

Expedia currently has a two-night stay at Castel Monastero for two people for £716, based on two people sharing on a bed and breakfast basis.

Kirsty is an experienced journalist and travel writer, currently working on a national newspaper supplement as Features and Travel Editor. She is the founder of TravelLuxe.co.uk. 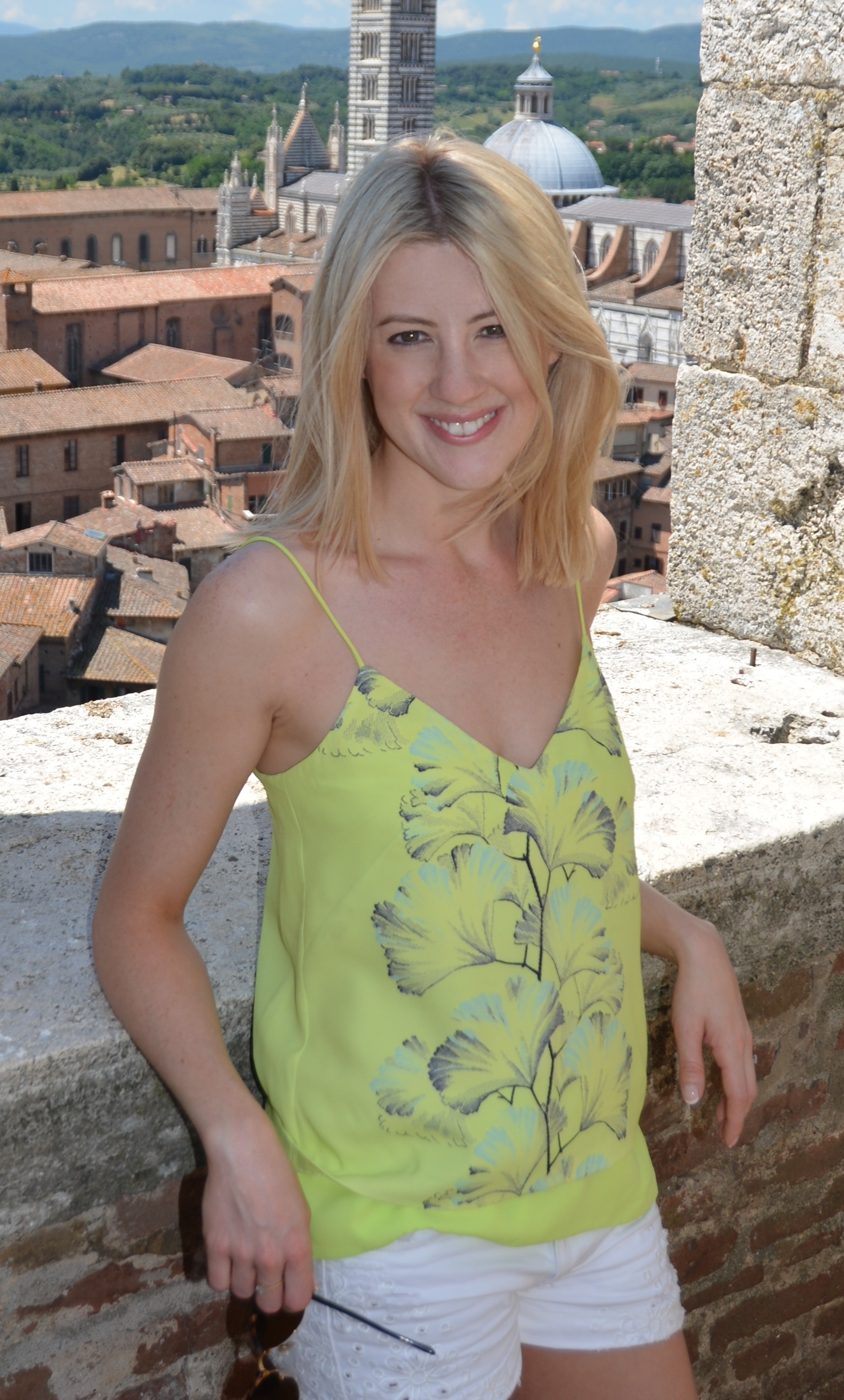